A new update for Frankfurt International Airport is just around the corner with a bunch of new things. Let's take a look and see what major changes have been done by our development team, which work on the scenery at all possible times.

Update 0.10.0 will feature all parking positions in the north of the airport, as they stand in real life. The basic airport layout is already complete, including all essential taxiways, runways and apron areas, including the first new N8 taxiway implementation in an EDDF scenery for a flight simulator. We also improved the parking stand signs at various parking positions. Further we included all stands and gates in the southern part of the airport including the brand new Terminal 3 as well as the Cargo Stands (S500-600). The General Aviation Terminal (GAT) stands will come in future updates. 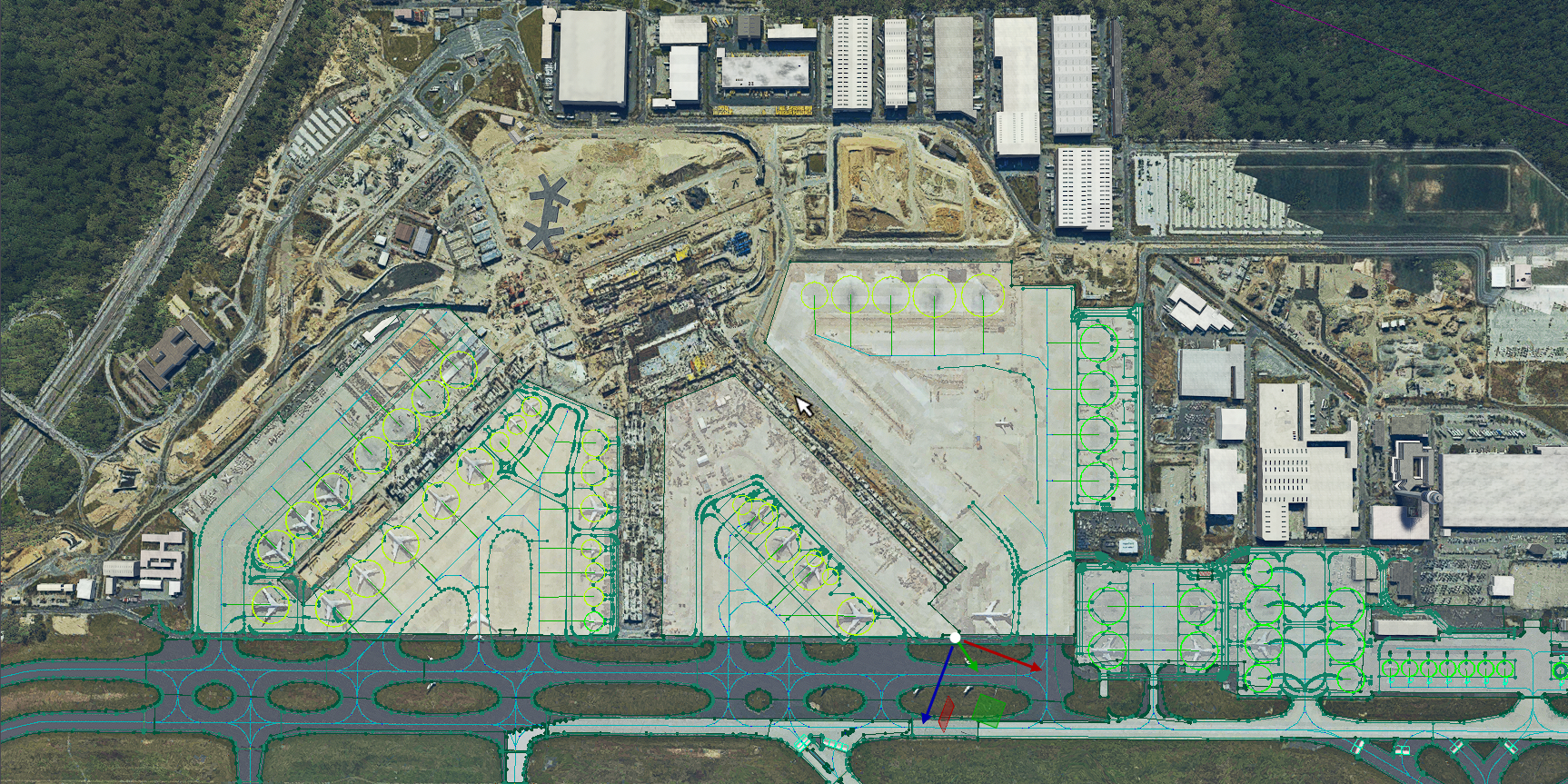 As you maybe already have noticed our scenery does also include custom objects around the airport. These include custom taxiway signs, taxiway markings and airport lights, such as the runway guards lights placed at the hold short line.

Especially taxiway signs and runway markings for RWY 18 have been added and updated, to ensure a safe taxi and line-up on to RWY 18.

One of our new developers and 3D-Experts, FRAEDDF, did a great job creating a lot of custom jet blast fences around the airport. 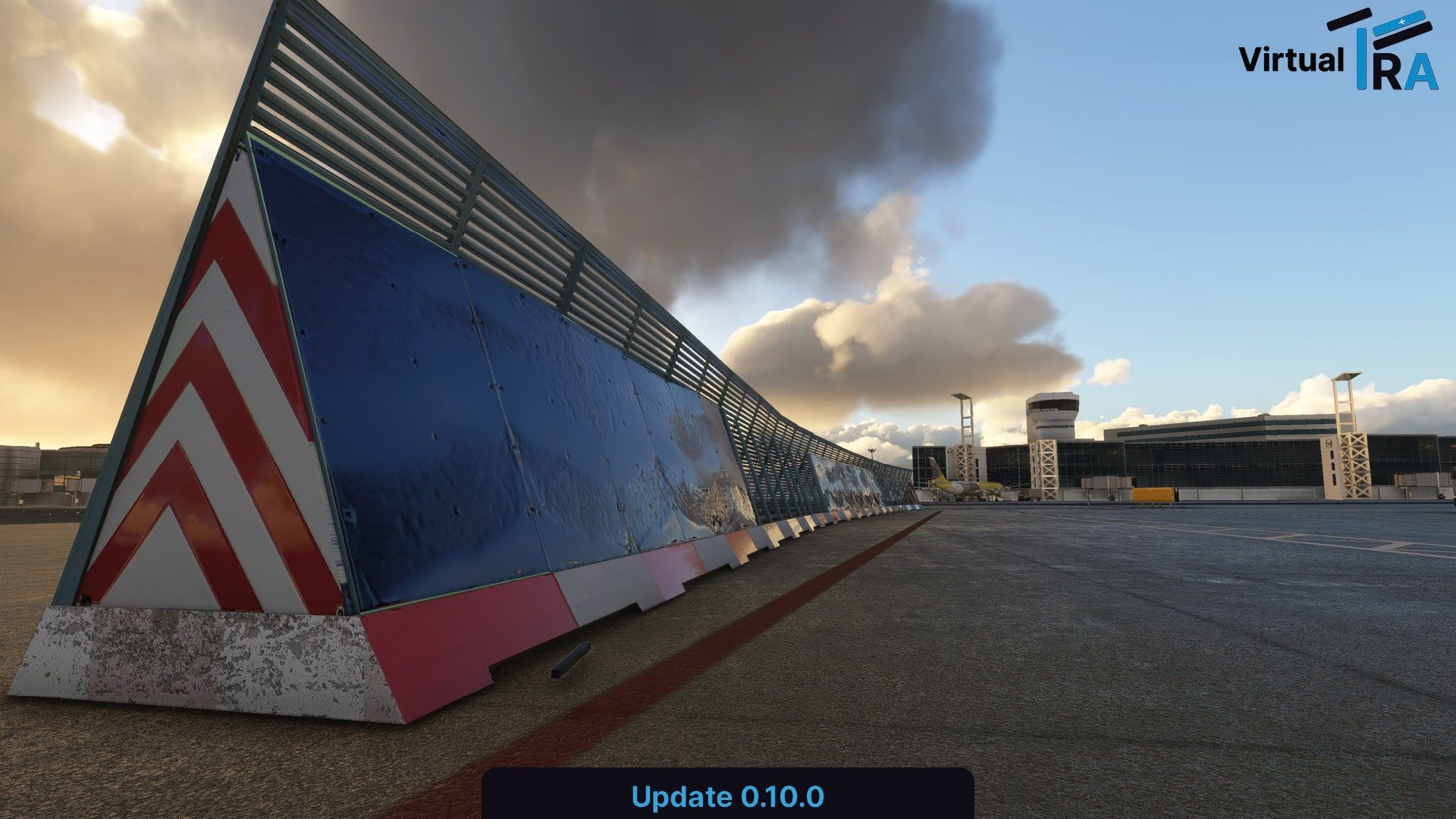 Update 0.10.0 will not feature new terminal buildings, but still the Dev-Team developed important buildings sourrounding the airport, such as multiple DFS antennas around the airport, which can be seen in the screenshot below. 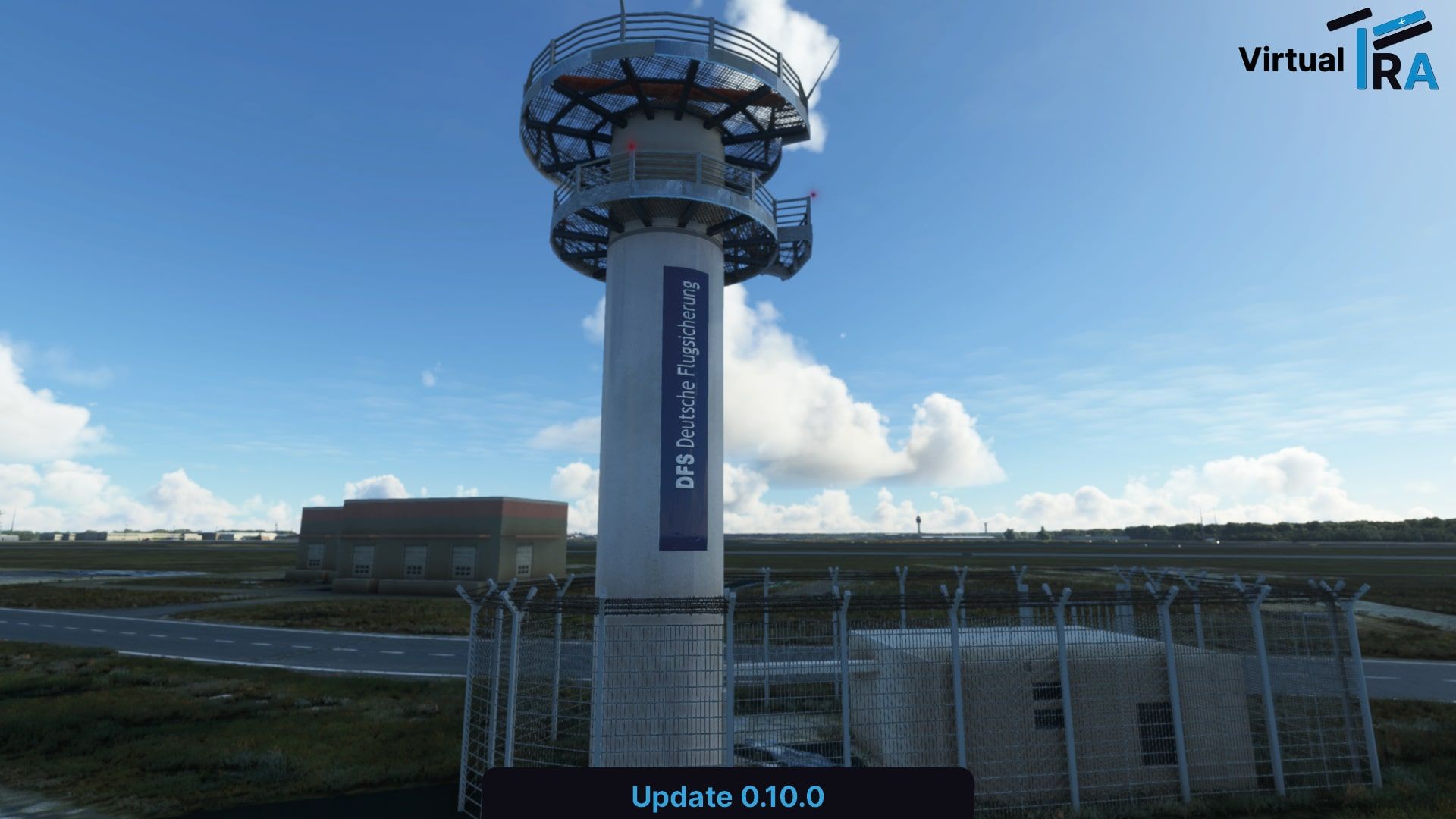 On our website we have now made it possible for you to report any issues directly to us. On the homepage you will find the Report an Issue button in the menu bar.

The work for virtualFRA surely does not stop, our goal is to recreate a realistic, true to life scenery for Frankfurt, which is completely free for all MSFS users. Obviously all buildings and objects will be complete at some point, making our scenery a unique scenery!

Within the next update you can expect a first implementation of the iconic tank farm, improved textures on the terminal buildings, along with many more 3D-Objects. 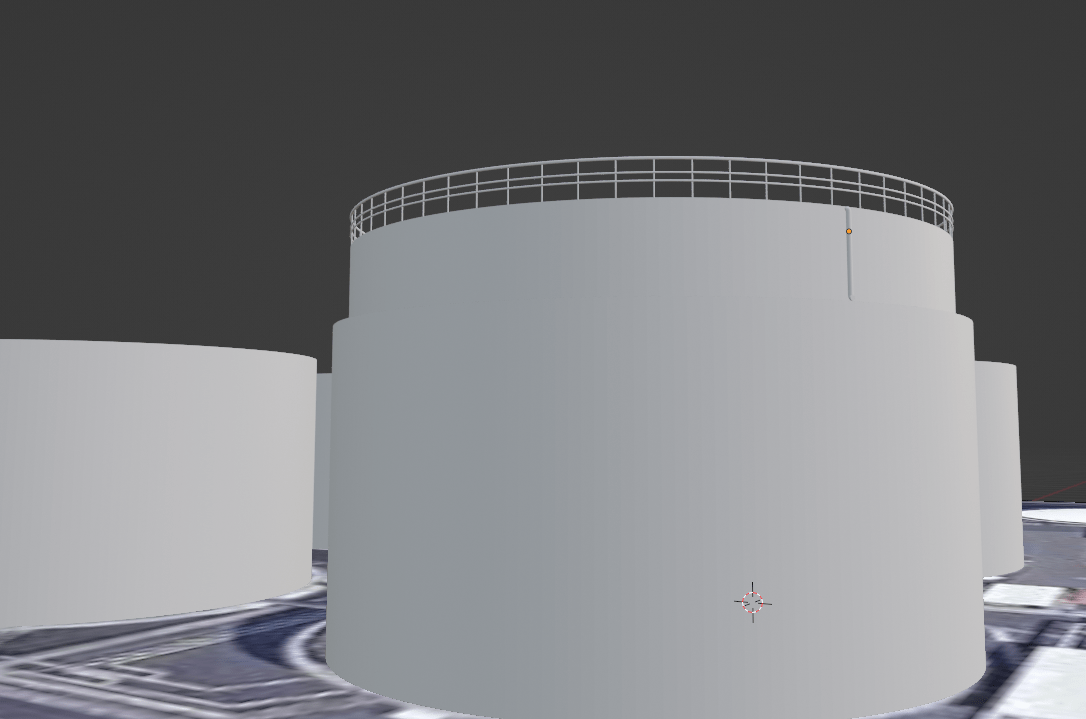 The major goal is to finish the terminals and their texturing, not only the terminals play an important role in Frankfurt, but also many other buildings placed at different areas at the airport.

The team has already taken a dive into the area of VDGS. We know all simmers love this feature, and since it is used at the real FRA, virtualFRA will include VDGS aswell.

We are expecting the AddOn "GSX" from FSDreamTeam this year and will equip it with its own INI config file for our airport. However, since we want to continue to work independently of paid 3rd party addons, we will also offer you a second version of the airport with the NOOL VDGS system. This is already in the works! More on VDGS:

In order to shorten the waiting time, we have included some placeholder for you as seen in the screenshot below. 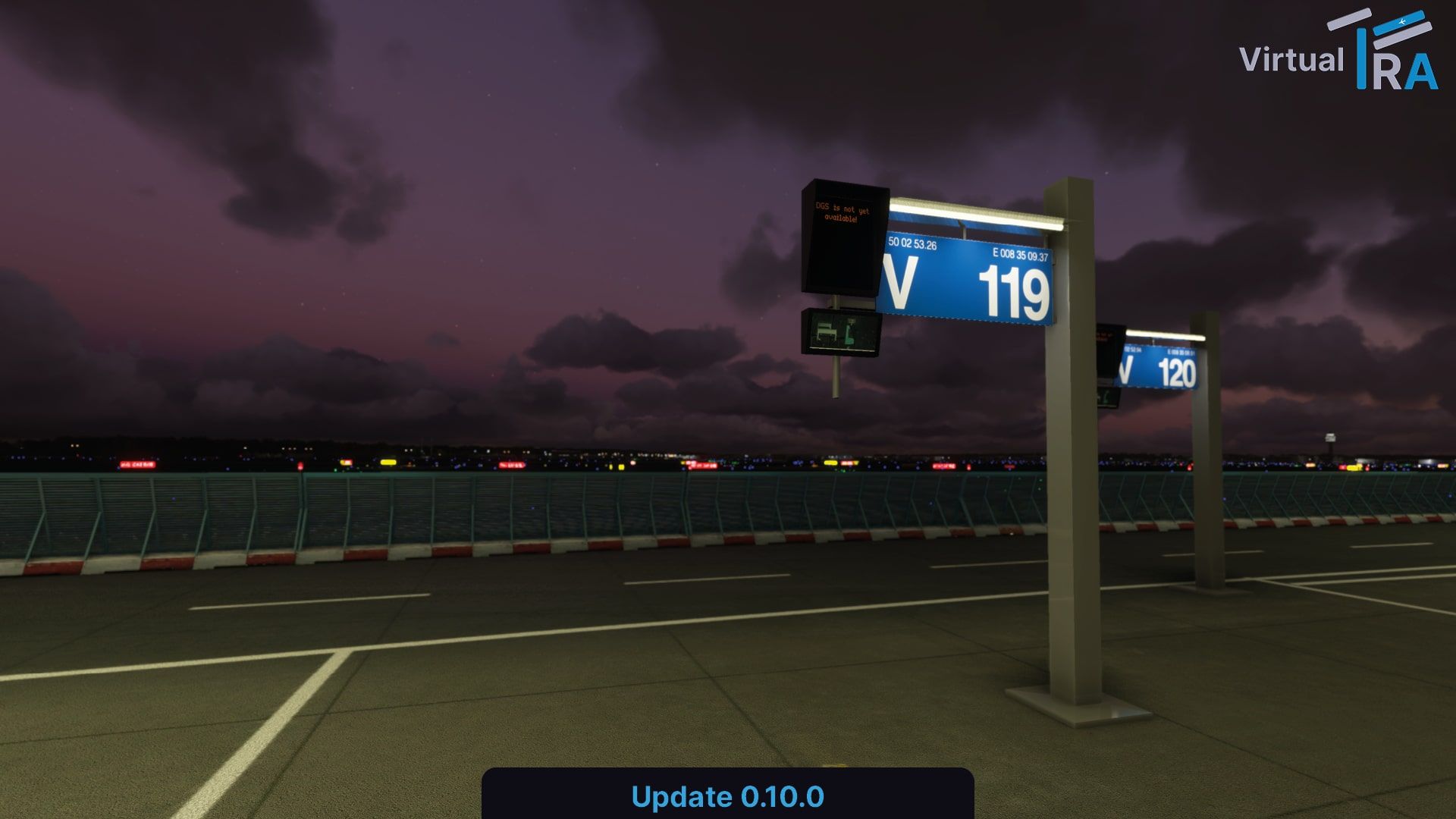 We can't wait to share more insight with you in the next Dev-Blog, so stay stuned and happy landings to you all!